If you are smiling or not trying to show any expression at all, but your face still looking angry – frown lines are to blame

You are laughing at colleagues’ jokes, smiling at the sunshine or surprised at sow in the middle of spring – and yet look angry or concerned. Why? The answer is simple – vertical wrinkles are appearing in between your eyebrows. Is it possible to get rid of them?

According to doctors, although there are several types of wrinkles, like expression lines on the forehead or “crow’s feet” around the eyes, most patients are concerned about the frown lines.

“If a woman complains that a wrinkle appears on her forehead when she is worried I usually assure her that it is normal. The issue is more serious when the frown lines appear despite a person not trying to show any facial expressions,” – says dr. Dainius Balčiūnas, a plastic and reconstructive surgeon.

“It seems the person is kind, his eyes are smiling, but his face looks like he is always worried. This usually occurs because of the increased facial muscle tone – a constant tension in the facial muscles. When people return to the gym after not having exercised for a while they say they can still feel high muscle tone. The same happens with people who make a lot of facial expressions – they are unable to relax facial muscles. Some mimic muscles are attached to the bone, the others – to the skin. As the muscle contracts the skin contracts as well at the point where it is attached to the bone. This creates a wrinkle, “- says dr. Renaldas Vaičiūnas, plastic and reconstructive surgeon.

A lot of different tips on how to slow down the appearance of the frown lines can be found in literature, for example, regular facial exercises. But if the frown lines have already appeared, it is unlikely that exercises will make them disappear.

Botulinum toxin injections can be an effective treatment. According to doctors, it can eliminate wrinkles in about two weeks, and the effect can remain from 6 to 9 or 12 months. If the wrinkles are deep and the skin structure have been already affected, you may have to use a combination of botulinum toxin and hyaluronic filler injections. Such combination is highly efficient and long-lasting – it can last for up to 18 months or even longer.

“The best way to deal with the causes of frown lines are Botulinum toxin injections.  Hyaluronic acid products only mask the appearance of the wrinkles, but do not eliminate the root cause of frown lines, so the effect is much shorter. The same applies to all facial wrinkles caused by the high tone of the mimic muscles”, – notes dr. R.Vaičiūnas. 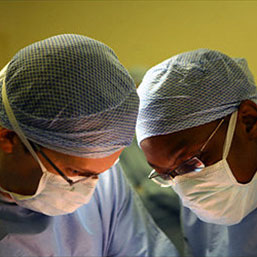 BACK IN 2008: ONLY SURGERY SCARS REMAIN OF WHAT WAS ONCE A HUGE TUMOR

Have questions?
We will answer.

Your message has been sent,
we will contact you.